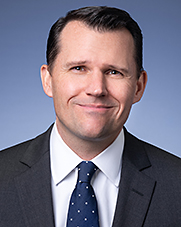 Mr. Grabske has successfully represented clients in high stakes trials and before the Court of Appeals.  Mr. Grabske has also been recognized as a “Rising Star” in Los Angeles magazine’s Southern California Super Lawyer edition.

Mr. Grabske is actively involved in several industry organizations, including the International Right of Way Association (“IRWA”) where he has been a speaker at several local and national IRWA conferences.  He also recently co-authored a chapter on condemnation for the American Bar Association’s expert-witness treatise entitled Litigators on Experts: Strategies for Managing Expert Witnesses from Retention through Trial.

Prior to attending law school, Mr. Grabske worked in Washington, D.C. in positions on Capitol Hill and in the business lobbying community.  Mr. Grabske served as a Congressional Affairs Representatives for the United States Chamber of Commerce and as the treasurer of the Chamber’s Political Action Committee.

Mr. Grabske received both his B.A. and J.D. from the University of Southern California.

Los Angeles County Metropolitan Transportation Authority v. Gillis Family Partnership – Represents the Gillis family against the Los Angeles County Metropolitan Transportation Authority (“Authority”) in connection with the Authority’s taking of a building owned by the Gillis family in Century City.  Before being displaced, Gillis also operated a cutting edge medical laboratory in the building.  The Authority initially offered $41,416,650 for the building and improvements.  In early 2018, Murphy & Evertz earned an award of $53,503,000 for the building and improvements.  Claims for loss of business goodwill remains outstanding.

City of Ontario v. J.W. Mitchell Company, LLC, et al. – Represented the owner of a 43 acre site improved with a 762,296 square foot warehouse/distribution facility.  The facility serves as the regional distribution center.  The City of Ontario acquired portions of the property for its South Milliken Avenue Grade Separation Project.  The City’s initial offer for the taking was $1,325,000.  Pursuant to the owner’s request, the City modified the scope of the taking to mitigate on-site impacts.  The case settled shortly before trial for $4,500.000.

Caltrans v. Javad N. Sani, M.D., & Parvin Nahvi, M.D. – Represented owners of three ocean- and pastoral-view parcels totaling 13.47 acres off Highway 1 in San Simeon.  Caltrans sought to condemn portions of two of the three parcels for its State Route 1 Realignment Project.  Caltrans initially offered $2,073,800.  It later valued total compensation for the part takes at $4,000,200.  Caltrans ultimately agreed to pay $6,440,000 for full takes of two of the parcels, preserving the owners’ ability to seek compensation for the taking of, and damages to, the third parcel.

City of Anaheim v. Etchandy – Represented the Etchandy Family – – owner of a multi-tenant commercial/retail property at the southeast corner of East La Palma Avenue and North Tustin Avenue – – in an eminent domain action brought by the City of Anaheim.  The City sought to condemn a portion of the property for the Tustin/La Palma Avenue Roadway Improvement Project.  The City first offered $989,210, and later valued the total compensation for the part take at $729,126, and an additional $386,00 of temporary severance damages.  The City agreed to pay $2.2 million as just compensation for the partial takings. (2014)

City of Lake Forest v. Alexander S. Rados, Trustee – Represented the landowner in an eminent domain action brought by the City of Lake Forest.  The City condemned a little over 13 acres for a new sports park.  The city valued just compensation for the expert exchange at $6.665 million.  The case settled prior to trial for $15.4 million.

Caltrans v. ARAMARK Uniform & Career Apparel, LLC – Represented ARAMARK in an action brought by Caltrans to acquire one of ARAMARK’s key market centers for the I-215 widening project. Caltrans’ initial offer was $1,881,000.  The case settled prior to trial for $4,500,000.

City of Victorville v. First Assembly of God of Victorville, et al., – Represented the church in an eminent domain action brought by the City to acquire property for its Nisqualli Interchange Project.  The property taken included the primary driveway that provided access to the Church along with the front line of parking spaces.  The City’s appraiser valued the taking at $436,000.  the case settled with the City agreeing to pay $2.5 million, together with land use entitlements for new electronic reader boards, a counseling center, baseball field improvements and parking.

Fresno Unified School District v. International church of the Foursquare Gospel, et al. – Represented the denomination and a local Fresno congregation and its Pastor against the District. The District sought to condemn the property for a new elementary school.  The District initially offered $410,000.  The case settled for total just compensation of $1,350,000.

Orange County Transportation Authority v. Cinnamon Tree Homeowners’ Association – Represented a homeowners association in an action brought by the OCTA.  The OCTA’s pre-litigation offer was $525,000.  The case settled before trial for $1,100,000.

City of Fontana v. Requip Corporation – Represented Requip, a large construction-equipment broker, in an action by the City of Fontana to acquire a portion of Requip’s property for a freeway overpass project. The City’s pre-litigation offer was $916,000.  The case settled before trial for $1,671,000.

Caltrans v. Steiny & Co. – Represented Steiny & Co. (and its owners) in an action brought by Caltrans to acquire portions of Steiny’s property in Baldwin Park for the I-10 widening.  Caltrans’ initial offer was $151,000.  The case settled prior to trial for $600,000.

Berryman v. Merit Property Management, Inc. – Represented a large property management company in a class action filed by homeowners alleging violations of the Davis-Stirling Common Interest Development Act, Unfair Competition Law (UCL), Consumer Legal Remedies Act (CLRA), and other claims. After extensive law and motion, we succeeded in having the case dismissed at the pleading stage. The Court of Appeal upheld the dismissal in a published decision. The California property management industry viewed the decision as a major victory.

Superior Coating v. Los Angeles Unified School District – Represented school district in action brought by business alleging inverse condemnation, trespass, nuisance, violation of civil rights, among other claims with a multi-million dollar claim for damages prayer for relief.  Mr. Grabske was successful in having the court dismiss the case at the pleading stage.  Mr. Grabske also handled the briefing and oral argument on the landowner’s appeal.  The Court of Appeal upheld the trial court’s dismissal in favor of the school district.

Ganahl Lumber Company v. City of Corona (Watermarke Properties) – Representation of Ganahl Lumber Company challenging the City of Corona’s approval of a large-scale commercial and residential project adjacent to Ganahl’s property.  Ganahl contends the City failed to, among other things, properly investigate and mitigate the project’s impacts on traffic and circulation.  Ganahl contends the project will negatively impact access and visibility to its lumber business.  The case settled with the City and Real Party In Interest agreeing to approve new directional signage and easements in favor of Ganahl.

Speaker, “Developments in the Eminent Domain Law Across the Country and Around the World,” IRWA Annual International Eminent Domain Conference, Atlanta, GA, June 2011.